Note: From LibreOffice 4.2.5, the wildchard character sequence is .* (dot asterisk) instead of the plain * (asterisk) – 2014-06-04.
A new patch of Autocorrect feature allows the text replacement before or after arbitrary affixes depending on the starting or ending wildcard character * in the Autocorrect Replace pattern. This is a small, but useful enhancement in word processing, especially for affix rich languages, but I will show a nice improvement for French typography, too, using this feature.

For example, with the “i18n*” → “internationalization” item Autocorrect will find and replace i18ns with internationalizations, too. Hungarian spelling dictionary handles two thousand suffixes of a given noun, dozens of them are quite frequent, simply exceeding the limitations of the old Autocorrect feature. With the new patch and the modified Autocorrect list LibreOffice will be able to handle all forms of serious misspellings and common abbreviations, that is a real innovation for Hungarian and similar languages. But the following examples help the word processing in English and other languages, too: 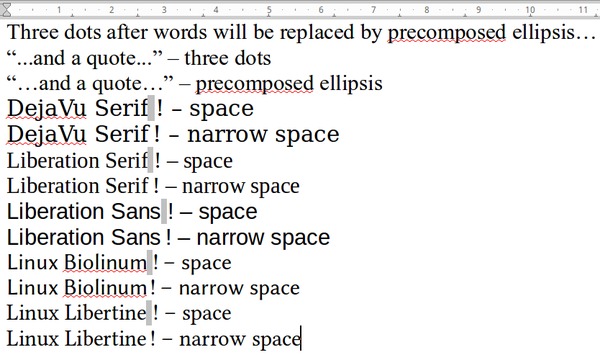